I met the beautiful and talented, Tina Harris, at our annual Kindermusik Australian/NZ Teachers Conference in Sydney 4 years ago. Fortunately,  I was invited to be guest presenter/Vocal Coach to the many uber talented Educators.

It’s so inspiring to be surrounded by women like her, who work so hard to bring music into people’s lives.

I’m so thrilled to have Tina  aka “Lah, Lah!” as our guest on the Blog.

It really goes to show that music is so powerful and a universal language.  There are so many aspects and directions that Music can take you.  That’s the beauty of it!

It’s a journey and it really can touch the soul of people no matter what age.  Let’s hear about Tina’s journey so far….

Did you ever imagine your life the way it is today? How did you get to where you are now?

Oh that’s a hard question. The dream 20 years ago is so different from the dream 5 years ago. When I was a student I was studying Opera, so everything about music was really learning about languages, movement and acting. What I didn’t realize back then was that all that training was the perfect background for what I’m doing now. Performing as Lah-Lah, I get to use all the singing, dancing and acting but in a much more kid friendly kind of way.

Mark (my hubby) and I chased the music dream to Paris. But along the way we ended up in Japan teaching English. 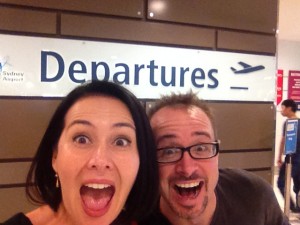 I loved working with children and when we returned to Australia to have our first daughter; a friend suggested I look into Kindermusik. I opened the first Kindermusik school which soon became 4. It was a wonderful but crazy time. At the end of every term Mark and I would do a little show. Parents would also comment and say, ‘why don’t you do a big show’, so the idea was born.

Our first season was self produced, we put on 24 shows in two weeks (crazy when I look back now). We recorded a CD and off we went. Mark Plays in Monsieur Camembert so we put together a band of friends and Lah-Lah was off and running.

Out of season one Nickelodeon signed us to make video clips and the opera house and Enmore theater booked us for our first seasons.

How do you balance motherhood and being a business-woman?

Gosh, I try to balance it and I always question myself on how it’s going, but that’s just being a Mum.

I think it’s important to take time out. Working from home is challenging because you can work all the time but I’m getting better at closing the office door and just having family time. We’ve also started a little routine where we play games after dinner at the table. Kids love this and so do I. 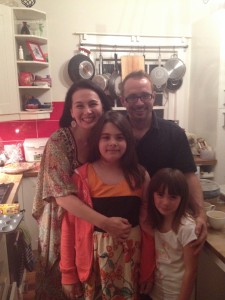 Mark, Tina and Lily and Emily

Best advice someone gave you about motherhood?

When it all gets too much, put the kettle on:)

Worst advice someone gave you about motherhood?

Oh gosh, is there such a thing? It’s all been pretty good…..

What are your thoughts about introducing music and movement classes to children?

Oh yes, it’s the most important thing. Music Music everywhere! There has been so much written in recent years on the benefits to learning and experiencing music. Young children get so much out of it and it’s good for them.

I am concerned that public schools in Australia don’t have enough of an emphasis on music early childhood curricular.

So, it’s so important that we expose our kids to as much music as is possible and different musical styles from all around the world.

What’s next for you?

Well the LIVE show begins touring Sydney in the April School holidays. This is a brand new show and we’re writing it at the movement. 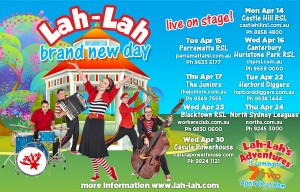 Then the Lah-Lah’s Adventures TV series starts.  It’s on 7TWO on April 28th at 8am. It’s a brand new Preschool music show and nothing like it has been done before. All the music is recorded with beautiful musicians and we even have live underscore as part of the live action. 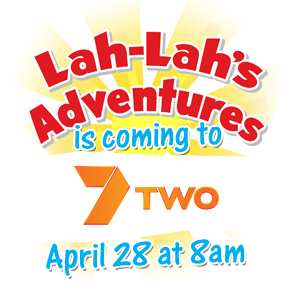 Cutest thing you have ever come across at a live show?

We have a wonderful family of triplets who follows us around from show to show. I remember the first time I came out on stage and they were all dressed up like mini Lah-Lah’s including their Mum who was wearing red and white socks!

To celebrate our new website- Kindermusik with Tina Bangel has teamed up with our friends at Lah-Lah to bring you some wonderful prizes.

If you value the importance of Music your child’s life then you have clicked on the right buttons!

I wish you luck during our exciting competition.

Music transforms lives and by entering this competition you have a chance to win an 8 week Kindermusik program for your child valued at $145.00. This will include 8 weekly 45min classes and Online materials.

Our bonues prizes will be CDs and DVDs from Lah Lah. We are excited to see Lah-Lah’s Adventures TV series start!  It will be on 7TWO on April 28th at 8am. Be sure to check out their live performances!

All you have to do is visit my Kindermusik page for details on how to enter! or Click on this link

Winner for the major Kindermusik prize must reside in Sydney but not restricted to the DVDs and CDs. Competition ends on the 1st of April, 2014.